I found this article quite interesting: Unauthorized biography spills Simon Cowell secrets that not only reveals that Cowell gets botox, vitamin drips, and colon cleanses regularly, but it reveals some of his struggles he’s had in the music and television businesses.  The book is written by Tom Bower, titled Sweet Revenge: The Intimate Life of Simon Cowell and focuses a lot on the money and power of Simon Cowell as well as his early struggles and humiliations in the business.

According to this Associated Press article:  While Bower has been openly hostile to some of his previous subjects — he called Gordon Brown a ruthless bully and Conrad Black a crook — he has a soft spot for Cowell.

“He doesn’t sit on his laurels. That’s what’s endearing about him. Although he is vain, he is a perfectionist and a professional — and he understands the business better than most.”

I am excited to check this book out!  I am always interested in books about powerful, rich people and how they got to where they are today.  Plus, I find something about Simon very endearing and I can’t help but like him. 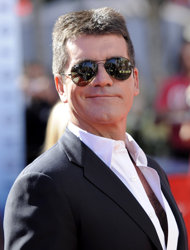 Click here to get your copy of Sweet Revenge: The Intimate Life of Simon Cowell on hardcover.