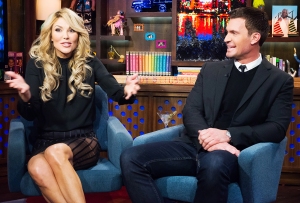 Andy Cohen knew he had a recipe for disaster (or maybe just good TV) when he booked Jeff Lewis (from Flipping Out) and Brandi Glanville (Real Housewives of Beverly Hills & this season of Celebrity Apprentice) at the same time on his show Watch What Happens Live.  Neither guest has a filter and usually not afraid to make a smart remark.  Jeff’s remarks are typically at the expense of others, whereas Brandi is typically just highly inappropriate.

Andy asked Brandi if she wanted to give Jeff’s hair a tug to see if he’s wearing a toupee, much like how Andy recently grabbed Kenya Moore’s hair to see if it was a weave.  Brandi quickly debates if she wants to touch it or not, Jeff warns her he has a lot of product in his hair, and then says “I can’t get a STD from you just touching it, can I?” Brandi gives him kind of a look and says “you better check your mother____ self…” but then turns to Andy to discuss Kenya’s hair.  She says she knows it’s a weave because they did Celebrity Apprentice together and she saw the hair and makeup people working on it.  There’s tension between Jeff and Brandi, but it doesn’t appear to be bad.  Okay, so this happens at the 10 minute mark and it goes to commercial.

They come back from commercial, Brandi and Jeff are talking and laughing.  Then they take another phone call question, play a silly drawing game with penises, and everything seems light and fun.  Cut to another commercial break, come back, at the 25 minute mark and Brandi cuts Andy off and says “Andy, before you do this, I have something to say about Jeff about the whole can you get an STD from my putting my hands through his hair…” she then throws her glass of wine at his head and says “as long as you wet it, right?  Alcohol kills everything.”  Jeff and Andy are just flabbergasted.  Their jaws dropped.  Jeff says “Really…. wow. I can’t believe I defended you.”  Brandi then proceeds to say “I really can’t even talk about this right now” and starts to get choked up and says she’s really upset and doesn’t want to cry.  She said, “I thought I wrote about it in my book so you would know….” and Andy says “The STD thing…”  and Brandi begins to cry.  And things get really awkward and uncomfortable from there on out as Brandi just sits there and cries.  Jeff says, “wait, why am I the one apologizing when I’m the one with wine all over me?” But Andy plays peacemaker and tries to smooth things over.

Then Andy very uncomfortably goes on to his “Mazel of the Day.”  Here’s what…. I honestly really like Brandi and all her crazy.  I also get that sometimes someone makes a comment and it takes awhile for it to sink in just how badly you’re offended by it.  However, in this case, I think Brandi was using it as a plug for her two books.  It did pique people’s curiosity about what she was talking about with the STD.  And lastly, she didn’t even look like she was truthfully crying or even all that upset.  To me, she was doing a last ditch effort to make her appearance on WWHL memorable.  And look, it worked because I’m here blogging about it.  Well done, Brandi, well done.

To see how it all went down, watch this….

AND…. as it turns out, as I suspected, it was all a prank to get Andy:

People @JLJeffLewis & I were joking!We are good friends !I turned around cuz I couldn't stop laughing we wanted to fool Andy! #wefooledandy

Just getting bAck to my hotel – It was just jokes for @Andy sake although @JLJeffLewis might have deserved it !#heartu #1st2foolAndy