Ooooh I’m excited!  This is going to be good… just hoping there is a little less yelling over each other so I can actually understand what they’re screaming about this time.  And the men join the ladies later which will be awesome!

Part 2 starts on the subject of Mallory butting into her sister, Cynthia and Peter’s relationship.  I have said it once and I will say it again.  Peter needs to be the better person in this scenario and at least attempt to be nice to Mal.  Mal is not innocent in this, she needs to just be happy for her sister and move on, however I understand her want to protect her sister.  I feel like Mallory is coming from a place of good in her heart whereas Peter is just being stubborn and mean.  But Mal shouldn’t badmouth Peter to Cynthia either.  Nene denies ever flirting with Peter.  Nene does flirt with Peter, but I agree it’s not like she’s trying to move in on Cynthia’s man.  It’s not like that.  But it’s still flirting.  Apollo and Kroy have now come on stage.  What’s up with Troy’s combed down hair?  Not liking the preppy/nerdy look on him.

Apollo and Peter drama… I don’t even remember how the friction started at Kim’s baby shower. Kroy describes meeting Kim at the dancing with the Atlanta stars and he is completely sweet and describes her as vibrant and beautiful.  Back to the drama with Apollo…  it all started when Phaedra made a comment to Peter about his club.  Then Apollo was just defending his woman when he got in a fight with Peter.  Apollo says he likes Phaedra’s donkey booty and Phaedra says she wants to do an exercise tape for donkey booties.  Kroy is 26 years old and about to be the father of 4.  Kim reveals that we will see her on Don’t Be Tardy for the Wedding without her wig.  Kroy says “She has hair, people.  She has beautiful hair!”  I’d still be interested to see her without the wig.  I think everyone’s curious.  Now that her wigs have become better quality wigs, I actually really like her wigs.  She looks so much prettier than she did in seasons 1 and 2. 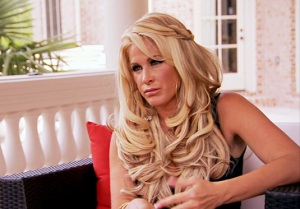 African Black “Babygate” as Andy Cohen puts it:  Did Kandi or Cynthia say that Kim would never hold a black baby in Africa?  Revisiting this is going to be good!  “I love babies, bitch!”  says Kim.  hahaha – love that clip!  Kim says Cynthia doesn’t even know her and is still a little offended that Kandi agreed that she wouldn’t have wanted to go to the orphanage.  Kandi is saying she just wouldn’t have wanted to be away for that long, wouldn’t have wanted to go on that long of a flight, etc.  Kandi said it had nothing to do with an African baby, black baby, etc.  Sheree apologizes for misinterpreting what Kandi said.  Sheree still says that she had an issue with Cynthia saying it and Kandi agreeing because she said she found it racist that they were saying that about their white friend.  It’s not a racial thing though, it’s just not her thing.  Just like camping isn’t my thing.

The issue of Tardy for the Party and Kim not paying Kandi her fair share is brought up again.  Kandi is over this topic.  Doesn’t want to discuss it.  Kim hasn’t paid her, and Kandi is just moving on from it.

Phaedra and her “pimp my funeral” topic is raised.  Oh the clips just crack me up.  Phaedra has added a lot of entertainment this season to the show.  She is like a cartoon character… can’t believe she really exists like this!  She sees it as an art.  lol Phaedra describes Apollo’s job which is “asset recovery” as people who have unclaimed money, he tracks them down to get the money to them.  ???  Except she seemed a bit confused about it as well.  Kandi had to step in and help describe it as someone who has died and left money to someone else and they don’t realize it.  Still seems a bit fishy.

Next up is the classless Marlo… she is a very hardened woman.  Nene and Marlo’s friendship drives me crazy.  Marlo says people are always linking her to different “men of the world.”  In other words… girl gets around!  Marlo’s kind of laughing about the way she came across on television and she seems a bit humbled by it.  Marlo says that she and Kim are cut from the same cloth, and then she says, “no we’re not, you’re a whore.”  The whole line sounded soooo rehearsed like she had been wanting to say this to her for months.  Then the room goes silent…. and cut to commercial.  Marlo says she never dates married men.  Marlo says Kroy couldn’t afford her ring so there’s no way she married for money.  Marlo is out for blood!  Marlo says Kim sold the ring she got from Big Poppa to help buy the ring Kroy got for her.  Ohhhhhh!  Kim would so throw down right now if she weren’t pregnant!  And it will continue in part 3 of the reunion!  YIKES!!