Jef with one f is Mormon – Shocker! Okay, not really a shocker

A conversation with a friend of mine after The Bachelorette finale tonight has sparked this blog post.  We were discussing how obvious it was that Jef was Mormon and yet ABC chose not to mention it on Bachelorette series.  Not that they ever seem to mention anyone’s religion but it almost seemed like they went to greater lengths in this series not to mention it.  She and I then discussed how important of a role religion can place in a relationship and how maybe knowing the religious backgrounds of the contestants could ruin some of the suspense.  Let’s say for instance if Emily were Mormon herself and we knew that along with Jef being Mormon…. it would take away a little bit of the surprise when it started to get narrowed down to the end.  Not to say that just because he’s Mormon that they would be destined to be together, but it would stand a better chance then let’s say a Jewish man.  So I went on Google and found this article on the Daily Beast.  Basically saying the same thing… why did they go to such great lengths to conceal his religion?  Even though Emily isn’t Mormon, she isn’t shy about her strong faith in God, and so you know they must have discussed religion on camera at some point.  So anyway, just thought I would throw that out there and see what y’all think.  Should religion be discussed on air on the Bachelor/Bachelorette series. 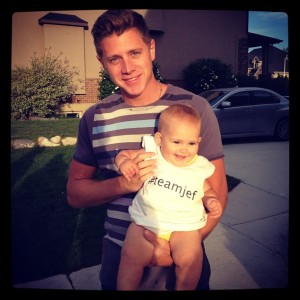