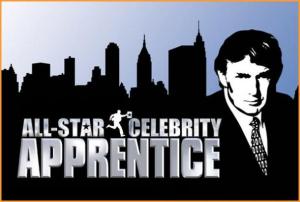 Another one hour Celebrity Apprentice!  Wish they were all one hour long instead of two… I’m liking this!

Episodes starts as they always do with the two who didn’t get fired in last week’s boardroom entering the suite where the other celebs are waiting.  When Dennis Rodman and Lil Jon walk in, the rooms goes crazy when they realize Omarosa has been fired.  Brande was probably the most relieved.  She really wants to prove that if Omarosa hadn’t been on their team they would have been winning all along.

Trump meets the celebs in the atrium of Trump tower with his wife, Melania, beside him. Melania is going to be launching her new skin care line and the teams need to create a two page editorial and display for the line.  Dennis Rodman steps up to be Power’s project manager and Penn is Plan-B’s project manager.

Milania comes to meet with Power first and Dennis questions her on if she’s the one that created the skin care line.  She says yes, that she’s been working on it for the last 10 years.  Dennis then says he wants to ask a very delicate question… if they were to go into her bathroom right now, would it be that product she is using.  Trace Adkins says in his interview that Dennis Rodman should never be allowed to speak to the executives.  The way the editing has made it look, Milania doesn’t really answer the question but jokes with him that he wants to go into her bathroom. Power is kind of falling apart without Dennis giving enough direction.  He does give the suggestion of doing a James Bond theme.  It’s too early to tell if the team has taken that suggestion or not.  Trace says he is not a businessman… he doesn’t know any businessmen that act like that.

Dennis and Lil Jon are at the prop shop picking up gold items.  Lisa and Marilu go out to get props and they call Penn who tells them the slogan has been changed to “Let your skin taste the luxury”.  Much better!!!  And he instructs them to get a “promiscuous” amount of caviar. (The name of the skin care line is Milania Trump – Caviar Collection).

Ivanka comes in to Power and she seems to approve of the work in progress and likes the slogan.  Eric Trump then visits Plan B while they are in the middle of shooting pictures of caviar.  The women start chatting it up with Eric and Penn kind of shoos him off and dismisses him.  He said “you’ve got all these good sled dogs working really hard and then someone brings in 10 lbs of hamburger, that’s what Eric Trump is.”

Trace is doing the graphic design stuff with the designer and I can see he has spelled Melania wrong… he has spelled it Milania.  Dennis signs off on it and says we’re good.  I hope Dennis goes home for this one and not Trace.  Dennis was a horrible project manager and gave Trace the final approval.

Power is about to give their presentation and they still have not noticed that they have misspelled Melania’s name.  So obvious that they are going to lose for that reason alone.

Penn presents for Plan B and the displays and posters look fantastic.  But then Penn makes a couple mistakes by choosing the wrong words and Gary Busey butted in at the end of it and added a few things that would have been better left unsaid. Brande does a great job presenting but the name being misspelled is obviously noticed off the bat.  But none of the Trumps said anything to the presenters.

Boardroom…. this is very anti-climatic.  Thank goodness this is just an hour long!  Trump asks Trace what he thought of Dennis as a project manager.  Trace says he was scattered.  Trump said Melania loved Brande’s presentation and thought she did a nice job.  Plan B all thought Penn did a nice job.  Gary Busey offers to be the male spokesperson for Melania’s skin care line.  He said he can be a great spokesperson for both sets of males: the heterosexual and the homosexual.  Oy.

Donald Trump passes each team the other team’s artwork and Plan B immediately notices that Power has spelled Melania incorrectly.  Penn looks like he’s going to leap out of his skin in joy when he sees that.  Before Ivanka could get through all of the positive and negatives of team Power’s assignment, Trump interrupts and says it doesn’t matter, truth is they spelled her name wrong, Dennis’ team lost.

In the boardroom, Trace is trying to blame the graphic designer but also says that Dennis that signed off on everything.  Eric points out that nobody on the team noticed, even in the ten minute presentation.  Dennis opts to just bring Trace back with him.  So Brande and Lil Jon are safe from the firing.  Trace says he shouldn’t be fired because he came up with the slogan and the display which Melania liked.  He’s fighting hard against Dennis Rodman who signed off on it and therefore Trace finds him responsible.  Trace brings up that Dennis asked if he could go in Melania’s bathroom.  Trump points out that Dennis is brought back in the boardroom every week.  Dennis, you’re fired.  Trump tells him he’s proud of him though and to keep up the good work.

Next week it looks like Marilu Henner joins team Power and the project is making a silent film.  Gary Busey is the project manager of Plan B.  I sure hope he gets fired next week!  I’ve said it a dozen times, I’ll say it again, Gary should have never been on the show!