The episode starts off with some of the ladies discussing who they think will get the date cards and how they’re all hoping for a one on one date.  Then I notice, Kelly, the dog lover (that’s seriously her job title) has a dog at her feet.  She for real got to keep the dog with her while she’s in the mansion?  That’s just really funny to me!  More power to her though I guess!

Chris Harrison shows up at the house.  He explains there will be a group date and two individual dates.  If you don’t receive a rose on your individual date, you go home.  I was hoping for a two on one date, but I guess that will come a little later.  Cassandra, one of the single mothers, gets the first date card.  “Love is a wild ride” the card says.  Juan Pablo said last episode to Cassandra that he’s not going to waste any of Cassandra’s time.  If he’s not feeling it, he’s going to send her home so that she can be back with her son.  So the pressure is on to figure it out if they have anything or not.

Cassandra meets JP in a park and they get in a convertible SUV type car (forgive me, not a car person, no clue what it is, but it’s cool looking).  He suddenly drives the vehicle off the road, through the sand, and directly in the water.  It’s a freakin’ speed boat!  That’s pretty sweet!

Renee and Elise have a heart to heart conversation back at the mansion about the reasons why they’re there.  Renee explains how hard it is to be a single mother.  Elise tells how she and her mom were super close and then her mom got melanoma skin cancer, but she (mom) had written a letter explaining why Elise should be on The Bachelor.  She never got to submit the letter, but Elise found it after her passing and said it was something that she had to do.  Like it was meant to be.

Back on the date, JP pulls the water car up to a yacht that the couple boards for the next part of their date.  In true Bachelor fashion, they jump off the side of the boat into the water.  And that’s all we see of them on the boat. Now the two of them go back to JP’s house.  They’ve literally not shown any conversations between the two of them on this entire date.   JP is now showing her how to dance while they were cooking.  She’s doing a lot of giggling, but not too many words.

At the girls’ house, the next date card arrives.  Let’s Kick It: Kelly, Renee, Sharleen, Danielle, Alli, Lauren, Christy, Andi, Lucy, and Nikki.  The two that aren’t on the group date card are Elise and Chelsea… the two blonde teachers, as they point out.

On the date, they show each other pictures of their kids.  They talk about parenting a lot.  Cassandra says she’s a protective mom.  Cassandra tells him that she had a really good time and she can see something developing.  JP then presents her with the date rose and of course she accepts it.  They kiss and Juan Pablo definitely seems taken with Cassandra’s looks.   I think she’ll stick around for awhile because they seem to have a strong physical attraction, but I’m not sure there’s anything beyond that for them.  It all seems very surface level to me. 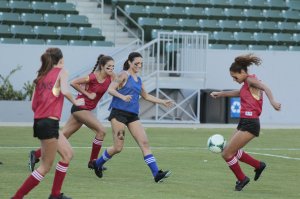 Now for the group date.  Juan Pablo takes the ladies to play soccer with the LA Galaxy.  The limo drives the ladies right out on to the field.  The girls get the cleats on and Alli says she’s been playing soccer her entire life.  Kelly admits she is not athletic and she does not seem excited about this.  Sharleen, the opera singer, definitely seems out of her element.  The girls now divide into the blue team and the red team to play against each other.  The girls really get aggressive and Sharleen just keeps getting hit…. in her arm, her face, etc, but she keeps truckin’.  Suddenly the blue team starts to get defeated big time, so Juan Pablo joins their team to help them out.  Game ends and JP says it’s not about who wins but who is having fun.

Night time, the girls are all dressed up, and now more time to spend with Juan Pablo one on one.  Nikki has one on one time with JP first and explains that her biggest fear going on the show is getting hurt.  JP says there’s something about her that he wants her there.  He told her that he likes her.  They seemed very comfortable together.  Andi then gets time next.  They sneaked into the concession/kitchen area to make out in for a bit.

Last date card arrives and it’s for  Chelsie!  Elise is shocked.  She really thought it would be for her.  The date card says “Do you trust me?” Elise is really dwelling on the fact that Chelsie seems so young to her.   She doesn’t think Chelsie is ready to be a stepmom.

Sharleen and JP get some alone time out on the soccer field.  All the girls are spying on them from the stands.  Juan Pablo goes in for a kiss first and then Sharleen goes in for more kisses.  All the girls see them kissing and get jealous, especially Andi.  Sharleen and Andi are both certain they’re going to get the date rose.  JP picks up the rose and decides to give it to Nikki…. one of the girls he did NOT kiss that night.  So then Andi and Sharleen’s confidence is totally shaken.

Next morning, JP goes to the house to pick Chelsie up for their date.  They get in the car and JP turns on radio and encourages Chelsie to loosen up by dancing in the car and singing along to the music.  They stop at this Venezuelan restaurant and try a bunch of different foods.  She’s loving the food and trusting what he feeds her.   So then they get to a bridge…. they start talking about heights and she gets it figured out that they’re bungee jumping off the bridge, tandem.  Chelsie is freaking out and I would be right there with her.  Actually I think I would be sobbing hysterically.  There’s no way I would do this for a man or a TV show.  “Holy moly macaroni” Juan Pablo says.  Okay here comes Chelsie’s tears…. don’t do it, Chelsie!  It’s not worth it!  * commercial break – suspense is killing me! * We come back and he’s saying to her “Nothing’s going to happen.  Just do it for me.”  Don’t do it for him!!  He then tells her “don’t do it if you don’t want to do it.  It’s fine by me.  We don’t have to do it.  It won’t ruined the date.”  Chelsie feels he’s sincere and she feels she can trust him.  Then the idiot says she’s going to do it and they jump!!!!  Are you freaking kidding me?!   lol…. I wouldn’t.  Hanging by their ankles, he gives her their first kiss.  I don’t see how that has to do anything with trust.  He had nothing to do with their safety.  Ugh stupid show!

Then they continue their date outside City Hall in Pasadena.  It is beautiful.  They talk about their fears and JP says his fear is not being a good example to his daughter.

Back at the date they focus on Elise for about the third or fourth time talking about how young and immature Chelsie is.  Kat tells her she thinks Chelsie is 25 or 26.  Elise says she’s 27.   So really, they’re a year apart in age.  I think that kind of shut Elise up a bit.  But to me, this is foreshadowing.  If I had to make a guess right here, I would say Chelsie gets the rose and Elise gets cut at the rose ceremony.

Chelsie and JP talk more over dinner and about what a great time they’ve had on the date.  JP then presents the rose to Chelsie and she accepts.  Then Billy Currington plays a private concert for them.  Why oh why is it a country artist 9 out of 10 times on The Bachelor?  I don’t get it.  Anyway, Chelsie loves it though and knows every word to the songs.  Chelsie says this was the best day of her life.  Yeah, it would be pretty hard to top as far as dates go if jumping off bridges and country music is your thing.  Juan Pablo says she’s a keeper.

The ladies are all sleeping the next morning and Juan Pablo sneaks in the house and he decides to make breakfast for them.  No makeup, no hair done, and just seem the natural.  Juan Pablo loves making food.  Kelly is the first one out to walk her dog, Molly.  She said her grandma always taught her that you don’t let a man see you without your face on.   Renee just came down and walk   natural and confident.   Some of the other girls were more shy and self conscious.  The food looked amazing though!  Juan Pablo then says he’s canceling the cocktail party and having a pool party instead.

The women are getting very competitive and Kat especially seems to be the most aggressively seeking his attention.  Sharleen shares her insecurities with Juan Pablo and being camera shy.  She’s just not like the other girls, but I think he likes that.  They exchange a few kisses and a couple of the other girls see what’s going on and get jealous.  Clare gets a little insure/possessive/something and she starts crying in the bathroom.   There again is Renee by the crying person’s side comforting them.  I like that Renee is so mothering and nurturing but it also seems like she follows the drama…. and I’m not sure why.  If she needs to feel needed or what the deal is.   But Clare is totally breaking down and feels like she just faded into the background.

Clare sits down with Juan Pablo and explains how she’s feeling.  He assures her that he had a great time on their date last week and he wants her to be there.  Seems like he’s reassuring every girl there… but there are quite a few that didn’t get much camera time today: Lauren, Alli, Christy, Lucy, to name a few that are probably on the chopping block.

Rose ceremony: Nikki, Chelsie, and Cassandra have roses from the dates.  So the roses tonight go to:  Andi (yay!), Renee, Kelly (and her dog), Sharleen, Elise (my prediction was wrong), Kat, Alli, Clare, Lauren, Danielle.  Lucy and Christy did not get roses.  I barely remember Christy from anything.  She says she was cut because she’s not as open as the other girls.  And then there’s Lucy who was probably a little too open.  A little sad to see Lucy cry when she is such a happy, positive person.  But happy he got rid of another crazy girl.  🙂

Sean and Catherine’s LIVE wedding is SUNDAY!!!!  I love the two of them!  They make my heart gush. 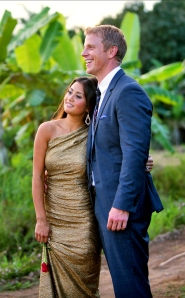