Teresa and Joe Giudice to speak with Andy Cohen 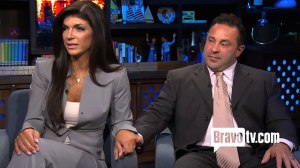 According to TMZ , Teresa and Joe Giudice did not give a statement to the press yesterday after their sentencing because they have a deal with Andy Cohen to speak on his show Watch What Happens Live on a special program Monday titled, “One-on-one with Teresa and Joe.”

What’s funny about this is that Teresa told the judge she doesn’t care about reality TV, all she cares about are her children.  She also stated that the character she is portrayed as on Real Housewives of New Jersey is not how she really is and that the show is “scripted” and uses “creative editing.”   Nothing like biting the hand that feeds you and then going back for more.

However, smart move on Bravo’s part because Teresa and Joe kept their agreement with the show and did not speak to any press.  This gives Watch What Happens Live and exclusive interview with the Giudices and if the activity on Twitter yesterday is any indication, this is going to be a highly rated program on Monday.  The topics are rumored to include: their fears, family, and fraudulent ways.  My prediction, even after a guilty plea deal, they will still deny deny deny.  Teresa especially seems to live in a fantasy world that has a hard time dealing with what’s really going on.  She will have sugar coated answers for everything, I am sure.  However, we all know Teresa well enough to know, she must be freaking out about going to prison.

Teresa received a sentence of 15 months in prison.  Her husband, Joe, will serve 41 months after Teresa’s sentence.