About once a season with various shows, I find some “favorites” that stick with me long after the show has ended.  Cast members that, for whatever reason, I feel compelled to research online in order to learn a little more about them.  Last night I was finally able to watch this week’s episode of Millionaire Matchmaker which featured the return of “Miss Hello Kitty” girl, Robin Kassner.  This time around, Patti gave Robin a makeover and some pointers (stick to the 2 drink maximum rule!!) and gave her a really great selection of guys to choose from.  For her mini date she selected Dev and Joe.  Dev (aka Clark Kent) was attractive but obviously couldn’t have been that into her because after she selected him for her master date, he stood her up.  What a gentleman!  Sheesh!  So in steps Joe as runner up to take her on her master date and Robin is less than thrilled.  First of all, I get it, who wouldn’t feel a little bummed and hurt by being stood up?  That really stinks, but suck it up and enjoy the date you have sitting in front of you.  It’s better than being alone at home with your dogs!   Joe was the PERFECT gentleman though.  He was very complimentary to Robin, showed up with two bouquets of flowers (okay, maybe two was a bit overkill, but A for effort!), he told her he had a great time, she’s a great person, and where he would like to take her on a second date.  However, at the end of the date she still didn’t feel a connection. 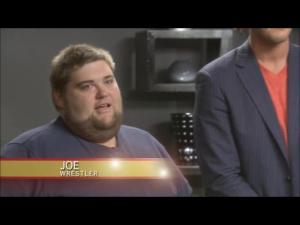 My initial thoughts were “awww but he’s such a great guy, why doesn’t she see that?!” But as time went on I began to wonder… why would I want to see this nice man, Joe, to end up with this shallow, alcoholic, brain-dead woman, Robin?  It’s ridiculous that I was initially left feeling like Joe was the underdog in this situation.  No, let’s us not be mistaken here, he is the one who wins in the end.  He came on the show, completely poised, respectful, intelligent, adorable and with his dignity still in tact.  Whereas Robin, just makes another fool out of herself (even if she was slightly better than her previous episode), still appears to be just as shallow and superficial as ever, and leaves a lasting impression of that of a cartoon character rather than a human being.  No, I will not feel sorry for Joe any longer.  I am sure he is feeling much more love right now from friends, colleagues, acquaintances, etc than she is.  So Joe, you go on with your bad self and you go find a woman much more worthy of your love than Robin!

So back to my “research”… I discovered Joe’s not only a wrestler but also a singer and aspiring actor.  He’s appeared on Tosh.O, Operation Repo, and the Grind.  Currently lives in L.A. but lived previously in Florida and considers Detroit, MI his hometown (My home state!! I knew I liked the guy!).   His story seems to check out that he’s as genuine and sincere as he appeared to be on the show.  Want to know more and would you also like to research Joe?  His full name is Joseph Carl White II.  You can find him on Twitter @josephcarlwhite or Facebook https://www.facebook.com/joew182 .

Don’t know who this Robin character is I speak of?  Chelsea Handler says it best after Robin’s first appearance on the Millionaire Matchmaker:  http://youtu.be/j4OthdE6PJo