On Late Night with Jimmy Fallon last night, Prince performed his new single “Bambi” after inhaling helium.  Okay, not really, but it sure sounded like it.  Amazing guitar skills yes, best singer in the world, not even close.  For the performance that featured many guitar riffs he asked to borrow Captain Kirk Douglas of the Roots (Jimmy’s house band) expensive 1961 Epiphone Crestwood guitar.  Captain agreed, Prince killed it, and then smashed it.  At the end of the performance, Prince, being the Diva rockstar that he is, threw the guitar up in the air and walked off stage.  The worst part? Douglas asked for Prince to autograph the damaged instrument and Prince refused.  Not cool Prince, not cool.

Click this link for a video of the his performance:  http://www.latenightwithjimmyfallon.com/video/prince-bambi/n33470 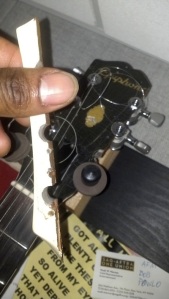