There is no cuter Bachelor couple than Sean & Catherine.  You can argue with me on that point all you’d like, but I won’t buy into any of your arguments.  Sean, even though some say he’s boring or very “vanilla” he’s attractive as hell, he’s driven, he has a killer smile, family is very important to him, and he knows how to treat a woman.  Catherine happens to be that lucky woman.  She’s beautiful, smart, quirky, funny, and extremely loving.  These two are a perfect match and if they had to meet through a TV show to find true love, more power to them because it worked!

The wedding is taking place at Four Season Biltmore in Santa Barbara.  Guests are outside mingling waiting for the festivities to begin.  Of course among the guests are tons of Bachelor/Bachelorette faves.  Of course before we can see the wedding happen, we have to go back through the clips of how they fell in love on the Bachelor.  I’m assuming if you’re reading this then you’ve already seen them fall in love.  I don’t need to recap that.

122 days before the wedding, we see Sean and Catherine go on a road trip to Dallas.  Lots of home videos.  In the corner of the screen we get to see the live cam of what’s going on at the wedding site.  We see the first glimpse of Catherine and, of course, she looks gorgeous!  On the road trip, Catherine starts the wedding planning.  She figures since she has Sean’s undivided attention, it’s a good time to talk to him about the wedding stuff.  Like almost any other man… he really doesn’t care about the wedding itself.  He just can’t wait to be married.

Upon arriving to Dallas, Catherine is moving in with Sean’s best friend, Laura.  The two of them are going to be living separately until they get married.  ADORABLE!  I love that.  I don’t know why… but it makes it such a romantic story to me.   Sean will be living just a few blocks away in a loft he’s had for awhile.  They describe how they don’t like to be apart from each other even though they’re just five minutes away.

Sean and Catherine meet with Sean’s family 97 days before the wedding to tell them they’ve decided on a wedding date.  [Live Cam update:  Is that Andy Dick talking to Sean’s dad at the wedding??  Strange!]  Sean’s dad, Jay, tells Catherine she’s so easy to love and the easiest thing has been bringing her into the family.  Sean asked his dad, who is a pastor,  if he would officiant the wedding.  He was completely shocked and honored to be asked.  He gets very choked up and of course that makes me tear up!  So sweet.

Jef Holmes, Arie Luyendyk Jr, and John Wolfner are seen talking at the wedding.  Two of the three of them are among my favorites! 😉

76 days before the wedding, Catherine meets with their wedding planner Mindy Weiss.  Catherine says she wants “grown sexy” in everything.  She describes it as sophisticated with an element of sexy with it.  She views the wedding as her coming out party as becoming an adult.  Catherine tells Mindy that they have waited for their wedding night to have sex.  We already know that Sean is a born again virgin, but is Catherine a true virgin?  Not sure… but it’s cute that they’ve waited with each other.

Catherine tells Sean about her meeting with Mindy and tries describing the concept of “grown sexy” again.  She finally settles on Robin Thicke.  Grown sexy is Robin Thicke.  Interesting.

58 days before the wedding… Catherine goes to try on wedding dresses.  She has her mom, Sean’s mom, and her best friend, Crista, there with her shopping.  She wants to find a dress that will blow Sean’s mind.  She could be a bridal model.  They all look beautiful on her.

Meanwhile, Sean goes lingerie shopping…. “for the wedding night, honeymoon, and beyond” he says.   He describes Catherine as a “chesty woman”.  He is completely embarrassed by this whole thing and to have it all video taped is completely uncomfortable.  But he’s able to make a decision and picks out three outfits.  This segment completely cracked me up and I know I’m not doing it justice in describing it.  I love Sean’s innocence, but you can tell that he’s still a man and obviously likes this stuff too.

43 days before the wedding… Sean and Catherine decide to decorate their own wedding cake just for fun.  For the record, a little over a month from the wedding, no couple would be wasting time doing this.  This was a total set up by the producers… just sayin’.   But it’s fun to see them having fun together.  [Live cam update: Lisa Vanderpump with her dog Giggy… yeah, I’m sure they’re night friends… what??  Why is she there?  Again, strange!]

Sean presents Catherine with a little gift.  Catherine opens it up and it’s the lingerie he picked out.  She starts giggling like a little school girl.  She’s clearly embarrassed too but loves it.  Catherine says it’s like icing on her body that she gets to showcase for him.  There is so much sexual tension in this whole show that they just need to hurry up already!  It’s definitely become the focus of the entire Special.

29 days before the wedding… They meet at Mark’s Garden to pick out the floral arrangements.  Then Catherine goes to get her hair and makeup done for practice for the big day.  After that Catherine gets a boudoir photo shoot done to share the pictures with just him after the wedding.  She says it’s a symbol of her giving herself to him.

Cuts back to Chris Harrison and he says “I know I should have a clever comment here… I’m just going to say, Sean, have a good night.  Coming up…[Chris can’t help but giggle at the timing of ‘Coming up’] tonight is Sean and Catherine’s big wedding night….”  Chris barely made it through that without completely cracking up and losing it.  Hilarious!

Chris sit down with Catherine and Sean a few days before the wedding to discuss the whole process.  They have sweet exchanges about how much each other means to them.  From further discussions with Chris, it definitely sounds like Catherine is not a virgin, but Sean is.  However, if I recall correctly, Sean is a ‘born again’ virgin.

FINALLY the wedding ceremony…. Sean walks his mother and father down the aisle….. very long aisle.  The 12 bridesmaids and 9 groomsmen walk down the aisle next.  Some of them are recognizable from the Bachelor/Bachelorette shows.  Sean is patiently waiting for his bride and beginning to sweat a little.  Ring bearers and flower girl look adorable!  They all did such a great job!  And now for Catherine….  absolutely stunning.  Sean is getting teared up before he even sees her.  Sean just lights up when he sees her.  It seems so quiet though with just 2Cellos playing.

His dad begins the service describing how they fell in love, his love for his son, and his love for Catherine and how happy she is.  After a beautiful speech from Jay, Sean’s dad, they both say “I do.”  …. ceremony’s still going on… quick commercial break… kind of awkward.  Glad I didn’t have a commercial break during my wedding.  Now they’re exchanging their vows that they wrote.  Catherine so eloquently says her heartfelt vows and ends it with “I can’t wait to shine together and make everybody completely blind.”  Sean equally eloquently recites his vows he has written in the most sincerest way possible.  Makes his dad choke up which makes Catherine giggle when she looks over at him.  Then the exchange of the rings.  “Love God the most, and you will love each other more.” are the final words of advice from Jay before pronouncing them man and wife.  Rose petals are shot up in the air and the two walk down the aisle together as husband and wife.

Pics from the ceremony taken off my TV, so sorry for the poor quality!!  Congratulations Sean & Catherine!!! 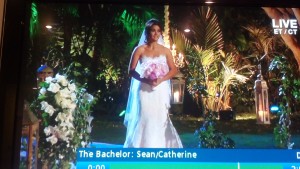