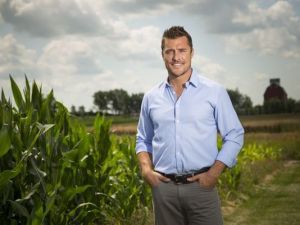 On last week’s episode we saw Chris Soules get introduced to 30 beautiful, and soon-to-be intoxicated, women.  At the end of the night he eliminated 8 of them.  However, as the episode was drawing a close and Chris was toasting the remaining ladies (they clearly needed more champagne), one woman was not going to take no for an answer.  We saw Kimberly walk back in and ask Chris if she could talk to him.  So that is where episode 2 starts off…. 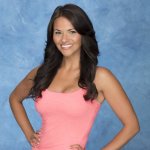 Kimberly tells Chris she feels like she didn’t have much of an opportunity to talk to him and she feels like she’s supposed to be there.  Like she was meant to be there.  The sun has begun to rise, these women are exhausted, had a lot to drink, and I think she is a bit more emotional than she otherwise would be.  I mean, c’mon, she said herself they barely had an opportunity to talk, how can she be this crazy over him after one day?  Have to say she is one of the more beautiful ones that were cut on the first day.   Chris goes to Chris Harrison and says he’s worried what kind of message that send to the other girls.  Chris H tells him it’s his life and he makes up the rules.  So then he leads Kimberly into the room with the other women and tells them he’s going to keep her and give it another chance.  The women are NOT happy and now Kimberly has a big target on her back (not that it’s up to the women to decide, but making friends may be difficult). 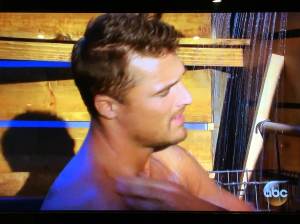 Chris Harrison informs the ladies that Chris Soules is staying just down the driveway. He also reiterates that there are no rules and basically encourages the ladies to sneak down to see him to get some extra time in.  Of  course the producers want that!!  Makes for great TV!  And with that, Chris H leaves the date card for the ladies and cue the outdoor shower scene with Chris Soules and also him standing in front of the mirror in boxer briefs.  Not minding this part! 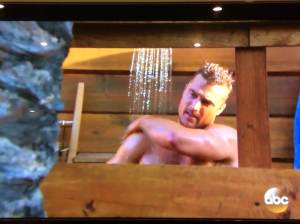 Jade, Tandra, Ashley I, Makenzie, Kimberly, and Tara get the date card: “Show me our country” is what it says.  The ladies meet Chris at TenTen Wilshire building (pretty sure they use this building on every season of The Bachelor) where they have a pool party.  Kimberly sits with Chris first one on one and she says that she wants to just start over and start fresh from that point on.  So Chris ducks around the corner and comes out and pretends to introduce himself to Kimberly as if they were meeting for the first time.  It was very sweet.

Back at the Mansion, two ladies Megan and Jillian sneak over to Chris house down the driveway and start going through his things.  Jillian’s crotch area is censored with a black bar.  (More on this later, see below) Megan puts his motorcycle hat on and begins to hit her head on the wall, the refrigerator, the bricks, just “to make sure it’s safe” for him.  I think someone has been drinking again. 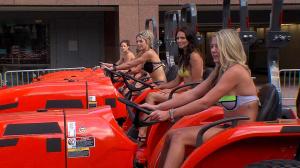 So on the date, the girls are still in their bikinis and they start walking down the street.  I feel like it’s Chris parading his women around.  Oh well… as long as we get equal objectification, I guess I’m ok with it.  More Chris shower scenes will even it out.  Chris leads them to where a bunch of tractor are parked and tells them they’re going to race them. Chris does impressions of how slow the girls take off on their tractors and it’s pretty funny.  Ultimately, Ashley I wins the race and gets some extra alone time with Chris.

Back at the house, Juelia tells the girls she has a daughter named Ireland.  The girls ask what happened to the dad and she explains that when Ireland was just a born, her husband died… he killed himself.  She didn’t understand her husband’s struggle.  at the time, and feels bad for that.  The women are very supportive of her opening up to them and telling her she’s very strong.

On the date, Chris explains to the 6 ladies that it’s hard dating six people at one time so he would like to continue the date with just one girl.  He chooses Mackenzie.  The other girls are upset that their date ended so soon, but  Tara is acting the most emotional over it.  Saying she’s coming up empty handed… again.  This girl is nothing but drama.  Dang!

Mackenzie is a little too giggly and weird on her date with Chris.  She first asks him if he’s had his ear pierced, and he said yes a long time ago and she says she just notices things like that.  Then she tells him that she’s attracted to guys with big noses and tells him he has a big, prominent nose.  THEN she asks him if he believes in aliens.  Mackenzie’s one of the younger girls (age 21!) on the show an it’s showing.  She’s coming across as very immature.  I get that she’s nervous, but this is her first opportunity to have alone time with him and she’s talking about his big nose and aliens and giggling way too much.  Nothing sexy about that conversation.

Next date card!  Megan “love is a natural wonder.” Megan then says “What does this mean?  This doesn’t mean this is a date, does it? It’s just like a note, right?”  Wow…. I think she hit her head too many times with that helmet.  The other women, of course, find this hysterical.

The next morning and Mackenzie is telling the girls about her date and how many times Chris kissed her.  They’re obviously getting jealous.  Now it’s time for Megan’s date with Chris.  They take off and get to the airport and board a private jet.  She is very outgoing and full of energy and Chris seems to be liking that.  Then they go from the jet to a helicopter (of course, it is The Bachelor… every other date has to have a helicopter).  They take the helicopter over the Hoover Dam and Grand Canyon.  The helicopter then lands inside the Grand Canyon.  Chris and Megan have a serious conversation and she explains to him that her dad just had a massive heart attack and passed away just days (at least it sounds like just days??) before going there.  So that may explain her drinking and her mind not being completely there.  She’s been through a lot.  She said she took a leap of faith being there and wouldn’t be there if it weren’t for the right reasons.  He says he’s lucky that she’s there. She said, “this really is amazing” and she goes in for the kiss.  She’s definitely fearless! Chris then obviously gives her the date rose.  Chris says in his interview that the date with her was just phenomenal.  They sure did kiss a lot!

Date card arrives back at the ladies’ house. Kelsey, Trina, Alissa, Tracy, Jillian, Becka, Amber, Ashley S, Juelia, Kaitlyn, and Britt “til death do us part” the card says.  On the date the limos takes them to the middle of nowhere to an old, abandoned  looking building.  The girls begin to freak out.  Then these zombie looking people jump out next to the limo. The girls scream!  There’s zombies everywhere attacking the limo.  Then Chris opens the limo door.  He tells them they’re going to attack the zombies with paintball. 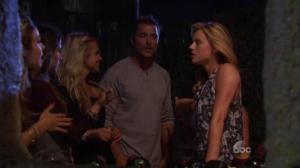 Ashley S kept thinking they’re shooting each other.  She just doesn’t understand.  The women are terrified she’s going to hurt one of them.  They go out in the paintball field and it is a pretty cool set up.  Ashley S is still taking this way too seriously.  The zombies are already dead and she continues to hit them with the paintballs.

Back at the house, Jordan is drunk AGAIN and start trying to do a handstand against the wall and twerk.  She is just a sloppy drunk.  It’s just ridiculous.  Jordan in her interview starts talking about how much hair Jillian has “down there.” She said Chris will have to take a weedwacker to it.  Wow.  When Jillian and Megan snuck down to Chris’s house, they did censor Jillian’s bathing suit area so maybe it’s true, or maybe they just want you to think that it’s true.  Either way… feeling HORRIBLE for Jillian watching this at home right now with her family.  Ugh, poor thing. (Update: Jillian and Jordan took to twitter (click on the link to the twitter pic to see Jordan’s post):

On the date…. Ashley’s definitely acting like she’s on drugs.  There is something not right at all.  Chris sits down with Kaitlyn and they exchange good conversation and then a kiss.  Chris says in his interview how amazing she is and “what the hell is she doing here for me?”  awww.  He’s so humble.  Meanwhile Ashley is acting more bonkers.  She goes to talk to Chris and I think she begins to freak him out. She’s pretty nonsensical.  At one point even crawling on the ground to get closer to a cat.  Just very odd, very sad, very obviously on something.

Chris has some great alone time with Britt and gives her a sweet card that says “Free Kiss from Chris” but then he ended up giving the date rose to Kaitlyn.  So it’s sending mixed signals to Britt.

Cocktail party time…. Chris gets a lot of time with each of the girls.  Ashley I reveals to Mackenzie that she’s a virgin and has never had a boyfriend.  Mackenzie is jealous and says “I can’t even use that!  I have a kid!” and she thinks Ashley I will have a leg up on the competition.  Ashley I then has her alone time with him and she does this silly thing about him making a wish a on her belly button genie lamp piercing.  So he wishes for a kiss and they really start making out.  Like hot and steamy.  Meanwhile, the other girls see this and are like, “whoa, she’s supposed to be a virgin.”  Britt starts crying and says she just doesn’t like them all having the same boyfriend.  Now Amber is kissing Chris!!  There’s only a few girls out of the 22 that he hasn’t kissed yet!  Sheesh!

Jordan in her sloppy drunk self and trying to have a conversation with Chris.  It’s not going well.  Jordan said she was going to go in for the kill to make out with him.  I’m glad she didn’t try because she would have been the only one he turned down (hopefully).

Rose Ceremony….  Roses go to Britt, Ashley I, Trina, Kelsey, Samantha, Juelia…. then Jillian comes walking out and slips on the rug because she thought her name was called and nearly falls.  Totally awkward!!  Roses continue… Amber, Tracy, Jillian (for real this time), Jade, Nikki, Becca, Carly, Brittany, final rose goes to…. Ashley S…. WHAT?!!!  He let Kimberly go (again) who is by far the prettiest and well put together girl there for ASHLEY S complete psychopath who can’t even speak sensibly?!  That HAS to be a producer pick.  I don’t get it.