The Challenge: Battle of the Exes 2: Episode 6 RECAP

Now that Johnny Bananas is out of the picture, the remaining cast feels they are equal playing field.  Bananas is a fierce competitor, having made it to the finals a record 5 times.  So the cast, big shocker, goes out and celebrates.  Little do they know that this season the winners of the Exile get a chance to come back in the game.

Challenge time:  “Don’t Forget About Me” TJ explains… Look at the puzzle at base, then solve the puzzle at the top of the mountain.  The answer key is buried under a 300 lbs steel door.  The guys will pull on a rope that pulls up the door revealing the answer key while the women study it.  After the door drops, the team must go to the top of the mountain to solve it.  Then the girls solve the puzzle.  If they get it wrong, they need to go all the way back to the beginning and start over.

The men immediately have a difficult time holding the door up for the women.  The puzzle consists of a pattern of different colors and shapes… it looks impossible.  Then they have to climb a freaking mountain and not forget the puzzle.  Jordan, the man with one hand, is smoking all the other teams in regards to speed.  The teams all make one trip up the mountain and just get a few tiles on the puzzle board.  Then they go back down the mountain to get another look at the puzzle.  After several trips, two hours have gone by, and everyone is exhausted.  Jordan and Sarah are so close to completing it but she’s struggling to get up the mountain.  She ends up throwing up while Jordan is screaming at her to hurry it up.  All the teams look like they’re going to die.  Wes and Teresa are working well together though and staying calm.  They ultimately ended up winning the challenge!!  They are the power couple!  Jordan and Sarah are  done but they’re missing a little black piece that got mixed up in someone else’s bag.  Leroy and Nia come in second and then Jordan and Sarah finally come in third.  The teams that are left are the ones who are really struggling to get along… especially Zach and Jonna.

TJ announces that it’s beginning to get dark and so they’re going to one more run down the mountain and back up again and whichever team has the least amount of pieces in the right spot will go into the Dome.  The challenge finally ends 5 hours and 30 mins into it.

So TJ announces the the worst team was Adam and Brittany.  It’s a freaking miracle that Zach and Jonna wasn’t in last place.   Their puzzle was all jacked up.

Power couple dinner:  Wes wants to send in Johnny and Averey in.  It’s because Johnny was aligned with Bananas and therefore Wes doesn’t trust them.  Averey is really upset because she’s friends with them and mad that it’s because of Johnny they are going in.  Averey tells Johnny they’re going in and a fight between them ensues.  Johnny is just so rude to Averey.

Wes announces to TJ and the house that they have decided to vote Johnny and Averey.  Later, Adam finds Brittany outside in the sun and he flips out that she’s tanning on elimination day.  She’s going to get dehydrated, he says. 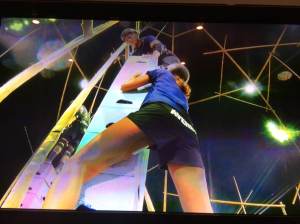 Dome elimination: “Stacking Up”  Stack crates in a tower to reach a bell.  One player will hand the crates to the other player who must climb the tower as they are stacking it up.  Both the men are doing the stacking and the women are doing the handing off of the crates.  Johnny is going slowly and methodical and Adam is frantic and trying to sprint to the finish.  Adam starts to get all wobbly and suddenly he loses his footing and the whole tower comes crashing down.  Then this strange calm comes over Adam as he and Brittany rebuild the tower.  Before long, he’s all the way caught up to Johnny again!  They are neck and neck!  They both get on their top crate and it’s going to be a matter of seconds who jumps to their bell first.  And then…. TO BE CONTINUED!!!  Ugh!!!  It’s killing me!