It is now down to the final five: Jay and Jenna, Zach and Jonna, Jordan and Sarah, Wes and Teresa, and Leroy and Nia.  Leroy is gunning for Jay because it was his decision to put Leroy and Nia in the dome last week.

The next morning Sarah is really bothered that she and Jordan are still at odds with each other.  She says she can’t handle it when someone is mad at her.  Sarah decides to write Jordan a letter to try to smooth things over.  Jordan forgives Sarah for the things that were said and done and they hug and make up.  Sarah cries, I cry, it’s just so sweet even though I don’t even like Jordan!!

Challenge time: “Speed Dating”…. The teams are going to jump from one tractor-trailor (semi truck) to another while they’re moving 30 mph.  Holy crap that would be hard!!  Not only do they have to jump from one to another, but they also need to grab two balls from the one rig and then jump back over to the other rig with the two balls and place them in the contraption thing.  They will go one at a time.  First the girl goes, then when she gets back, the guy can go.  They’re going to continue it all the way the road going back and forth.  But there are these smoke tanks in the middle of the road and the trucks will momentarily separate making it impossible to jump.  Also, the guys must stay on the outside of the girls or their safety gear will get tangled up and they will be stuck.  Really???  As if just jumping one time from one truck to another wasn’t hard enough!  Sheesh! 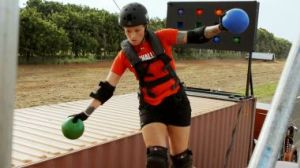 Jay and Jenna determine order because they were last week’s power couple.  So their obvious choice is Leroy and Nia.  Leroy is screaming at Nia to go but she is just frozen with fear.  She finally goes for it and successful grabs two balls and brings them back.  They go back and forth and are actually doing an amazing job.  They collected 10 balls total!  Zach and Jonna’s turn.  Jonna makes it across but on the way back she falls on the second rig and it kills a lot of time.  They collect 11 balls, but Jonna jumped off as the semis split and fell after the time was done.  Zach thinks they might be disqualified and he just LAYS into Jonna.  Screaming at her telling her she shouldn’t have jumped, what was she thinking, etc.  It’s a really ugly side of Zach.  Turns out they aren’t disqualified though and Zach relaxes a bit.  Of course he never apologizes to Jonna though.  Next is Sarah and Jordan.  After they each do a run back and forth their wires get tangled up and they’re not able to make it all the way to the balls on the other truck.  There’s nothing they can do and the result is they only have 4 balls.  Wes and Teresa next…. They did great and ended up with 10 balls.  So not first, but not last.  Final team… Jay and Jenna.  They get their lines tangled but luckily they were able to untangle them and get two more balls by the end, giving them 6 balls total.  So they are not last either.

All the teams have gone and TJ greets them.  He explains that Zach left the one truck before Jonna was back on it so their last ball does not count.  Jonna finds delight that Zach ended up being the one to mess up.  Out of the three teams who got 10 balls, the one with the fastest time ended up being Leroy and Nia!  Sweet revenge!  Now they have the power and Jay and Jenna know they’re screwed.  Sarah and Jordan are automatically in the dome for getting the least amount of balls. 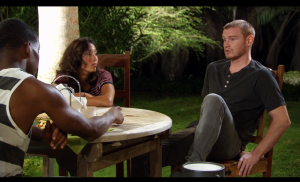 Zach tries to sit down with Jonna to smooth things over, but his attempt fails because he can’t stop being a jerk.  Jonna says when this is over she never wants to see Zach again.  He has just been horrible to her!!  Leroy and Nia sit down to the power couple dinner and it’s fried chicken.  Leroy comments that none of the other couples got fried chicken, but when it’s the black couple that’s what they got.  But he liked it, so he was just joking around.  Leroy said that he wants to sit down with each couple remaining and try to cut a deal with all of them.  He wants it to be a surprise when it comes to who he votes in to the dome.  No one is going to see it coming.   He tells Zach and Jonna they have nothing to worry about, they’re not going in.  Leroy tells Jay that he wants Wes to go in.  Leroy sits down with Wes and asks him who his number one is, he says Zach.  Wes tells Leroy if he wants to be his number one he needs to send Zach home.  Wes further manipulates Leroy and tells him that if they start working together and leave Jay and Jenna in the game, they have the best chance of going to the finals if Zach and Jonna go home.  Leroy and Nia then tell Zach that he might be going in after all.  Zach obviously then gets upset and start asking if Wes had anything to do with them changing their minds.  Leroy and Nia deny Wes had any doing in it.

TJ greets the group to find out who will join Sarah and Jordan in the Dome.  Leroy announces they are throwing in Zach and Jonna.  Jay and Jenna are relieved even though Jenna and Zach have something going on.  Wes says “Leroy pulled the trigger, Leroy loaded the gun, I just showed Leroy how the gun works.”  Wes is so good!  Love him!  Meanwhile Leroy is mad because Jay and Jenna haven’t approached them to say thank you for saving their butts.  Leroy confronts them and tells them they better show them the same respect in the next challenge and not throw them in to the dome.

Dome time!  “Hammer it Home” Hammer the I-beam down the track and get to the finish line first… they have to trade off… guys have to get it to a certain mark, and then switch off to the girls who have to get it a good distance further, and then switch back to the boys to finish it.  Jordan only has one hand… if Zach loses, it will be a pretty sweet day.  Jordan has a lot of strength, so I’m hoping it doesn’t hinder him too much.  They take off and Jordan’s holding his own pretty well!  Zach is screwing it up by holding the sledgehammer too close to the top.  Jordan has better form and is actually doing a lot better.  Zach is panicking.   Jordan finishes his first leg and hands it off to Sarah.  She’s doing a great job.  Zach then passes it off to Jonna and she catches up to Sarah pretty quickly.  But then Sarah pulls it out and ends up winning!!!  Zach is still treating Jonna like crap.  Sarah tells Jonna to hold her head up and she’s a great competitor.  Zach mumbles “shut the f*** up.”  Real classy.  So happy Zach is gone!!!

Four teams left and they are celebrating!!  Oh but wait…. one team comes BACK that’s been in exhile!! We find out who it is next episode!!