The Bachelor: Chris Soules – After the Final Rose RECAP

So we just saw Chris Soules propose on the finale of The Bachelor (click here for the recap of how it went down) and now it’s time for the live “After the Final Rose” where something “shocking” is supposedly going to happen.

Chris Harrison brings out Chris Soules to discuss if he still has feelings for Becca and does he still plan to marry Whitney.  Chris S tells Chris H right off the bat that Whitney is perfect for him and he can’t wait to finally be public with her and for it to be out in the open.  Soules seems to be struggling, once again, to find the right words to articulate how he feels though.  He seems extremely nervous.

Harrison then asks Soules if he was in love with Becca.  Soules says that he was falling in love with her.  Chris felt like Becca just wasn’t ready, and wasn’t in the same place as he is as far as settling down.  He said he’s not looking back and just wants to look forward with his future with Whitney.  Soules says that Whitney’s only been watching her own dates that have aired so she doesn’t get hurt or unnecessarily upset over anything she sees.

Harrison then brings Becca out to sit down with Soules.  Becca said it was a hard episode to watch back.  She said that she still has a lot of respect for him and she just couldn’t get to that point she needed to be at in the end.  Becca still says that she has never been in love and maybe she shouldn’t have gone on the show never having been in love. She’s a lovely girl, very beautiful, but man she still bores me to tears!

Whitney comes out and they get to see each other for the first time in public!  She is in a sparkly champagne colored dress that’s as bubbly as she is.  They seem genuinely happy together, very giddy.  Whitney says again that she didn’t watch the show back.  She said she didn’t want to see him with other women and she’s confident of what they have.

Harrison then shows a clip of his parents showing up at the barn right after the proposal and they are just over the moon excited he proposed to Whitney.  Such a cute moment!

Chris Harrison then questions Ashley S in the audience about how he asked her on the Women Tell All if she would be on Bachelor in Paradise but she didn’t give a clear answer then.  So he asks her again if she will be on it.  Her response “I suppose… I might be there.”  Harrison says “I’m going to take that as a yes!”  Crazy girl…. it will definitely be good TV, but I feel like she’s being exploited.  I think she just needs help, honestly.

Then Jimmy Kimmel came on stage and made some jokes… yada yada yada… and then he brings out a real live cow for Whitney and Chris!  Jimmy Kimmel says that the cow’s name is Juan Pablo.  Hilarious!

The announcement of the next Bachelorette!!  The next Bachelorette is…. Britt or Kaitlyn???  For the first time ever there will be TWO Bachelorettes…. the live audience does not seem on board with this idea.  The 25 guys opening night will make the decision of which Bachelorette they are more suited for.  What a weird season it’s going to be!  Chris Harrison asked what went through their heads when they found out it was going to be the two of them together.  Kaitlyn candidly blurted out “well that’s not ideal!”  Love her honesty!  It’s not ideal for us viewers either!! 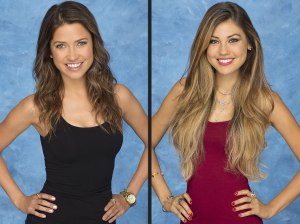