This has seriously been a fantastic season!  At the end of last week’s episode we saw Ian start to tell Kaitlyn how shallow he thought she was.  Basically, she wasn’t giving him enough attention.  She was kissing on everyone else and not kissing him and he was feeling rejected so he decided to reject her instead and hurt her.  Now this episode starts the dramatic conclusion to that conversation…

The speech she gives him was clearly rehearsed in his mind over and over.  He’s almost shaking as he says it.  He clearly knows his words are going to hurt her and that’s his full intention.  He finally finishes his speech and she asks “so you don’t think I’m here to find a husband?” he says “not from what I’ve seen.”  She admits she’s not as deep as he is, but says there are parts to her that he has not seen yet.  “Do I like humor? Yes. Have I seen that from you? No.” He then questions how important humor is in a relationship and stands by his argument that she’s “surface level.”  He ends with “and that’s what I have to say.” and Kaitlyn responds “and you feel good about that.”  And out walks Ian.  In the getaway car, Ian further trashes Kaitlyn and boasts how deep he is.  He says he’d be a great Bachelor.  Women would line up to be with him because he’s oh so deep.  Then it ends with him saying “man, I really need sex!!”  Yeah buddy, you’re so different from every other guy on the planet!  Your mom would be so proud of you. *eye roll*

Nick goes to see Kaitlyn to make sure she’s alright.  Nick confesses that Ian talked to him the night before about his feelings.  He tells her that he wants everything that Ian is looking for and he is still there.  He sees all those things in her.  Meanwhile, the other guys are a bit annoyed that Nick was the first one to talk to her after Ian left.  But guys!!! You snooze you lose!!  Be more aggressive and show her you care!  Sheesh!  Let’s just throw a pity party all the time… grow some gonads! Finally Shawn goes to interrupt but he finds Kaitlyn and Nick really kissing.  It really sets him off and he has to walk away.

Kaitlyn has a moment to fill the guys in on what Ian said to her.  Then Chris Harrison whisked her away to prepare her for the rose ceremony.  The guys walk down to The Alamo where the rose ceremony will take place.  Roses go to…. Jared, Chris, JJ, Joe, Ben Z (a bit surprised by this one!), and the final rose goes to Tanner.  Joshua and Justin did not receive roses and will be going home.  Poor guys.  😦  I don’t think they’re right for Kaitlyn, but I do feel bad for them.  Chris Harrison then announces that they will be off to Dublin, Ireland next.  Joshua can hear the rejoicing while he’s doing his exit interview and it’s just heartbreaking!!  He should have kept his cool, but I really do feel for him.

The gang arrives in Ireland and the guys are so excited.  Their digs are way cool at Radisson Blu. Kaitlyn meets up with the guys there and tells the guys the one-on-one date starts now.  No date card, she announces that Nick has 10 minutes to get ready and then their date will begin.  Nick and Kaitlyn stroll through a park, they’re very touchy-feely with each other and then they come across BIRDS!!  Kaitlyn has an irrational fear of birds.  So that was a funny moment. Then they came across street dancers and joined them in an Irish jig.  It was completely adorable.  The two really can’t keep their hands off of each other.  They have a very hot physical connection.

Evening portion of Nick’s date with Kaitlyn.  Kaitlyn confesses that she was hoping it wouldn’t be all that good just to make it easier on her, but it really is that good.  Nick is just so confident…. even when he’s not speaking that eloquently, he really gets his point across in a very romantic fashion.  She gives him the date rose and then asks if he wants to go back to her hotel room. The look on his face was priceless!  He was definitely surprised, but excited, and definitely not saying no.  They make out in the living space area of her suite then move to the bedroom and shut the door, but the camera keep rolling…. recording every sound Kaitlyn and Nick are making.  This is the part that makes me uncomfortable.  There’s people standing right outside the door!  I understand they have this crazy physical connection, and given if it were a real relationship off camera I’d say go for it, but they’re not in a monogamous relationship yet AND it’s being filmed for TV.  I think she should have waited (following the advice of Patti Stanger from Millionaire Matchmaker – “no sex before monogamy!”) but I can understand why she got caught up in the moment.

The next morning, Kaitlyn is definitely feeling guilty for doing this to the other guys.  She asks the producers “has this ever happened before?”  Nick tells JJ and Joe that Kaitlyn invited him back to her suite.  “It was casual, we just talked some more.”  Then the other guys come in the room, and he tells them as well that she invited him back to her suite and they just “talked” but it was very “intimate.”  The wind has been totally taken out of the guys’ sails.  They look completely deflated at this point.

Group date time…. Chris Harrison tells the guys that Kaitlyn is dead (for today) and they are going to celebrate her with a traditional Irish wake.  They go in a pub and Kaitlyn is there in a coffin and she can’t stop laughing.  Chris Harrison explains to them that each one of them will stand up and give a toast about Kaitlyn.  They all do a great job and take it all very lightheartedly.  Ben Z then asks everyone to leave the room.  It was just a bit real to him dealing with the death of his mom and he gave a really sweet tribute to Kaitlyn.  It was a really fun date to watch.

Evening portion of the group date… Kaitlyn is smiling and laughing with each of the guys that take her aside to talk to.  It’s refreshing to see the lightheartedness on this date instead of the drama and the heaviness.  At the same time, how can she feel okay with having just slept with a guy the night before?  I’m so torn watching this!!

Then Shawn gets time with Kaitlyn and he shares pictures of his family with her.  She makes him feel comfortable again in their relationship.  But then she gives the date rose to Jared and Shawn looks crushed again.  He feels like he’s getting mixed messages from her.  Jared and Kaitlyn get to continue their date while the rest of the guys go back to the hotel.  Jared and Kaitlyn then go off to a cathedral where the freaking CRANBERRIES are playing!!!  I’m in heaven! Absolutely love The Cranberries and love that Kaitlyn loves them as well! 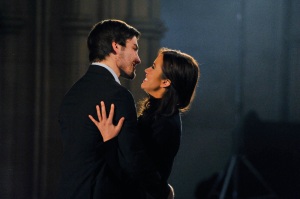 Meanwhile, Shawn is really having a hard time dealing with Kaitlyn choosing Jared to spend more time with.  He vents to a producer and says he can’t do it, he can’t do it anymore.  He got back to the hotel and he’s still stewing.  He says he’s not going to make it through this thing because he can’t handle it anymore.  He goes to Kaitlyn’s room to talk to her.  And then another cliffhanger!!!  Ahhhhh the show is killing me!!