The Challenge: Battle of the Exes 2 Finale RECAP – See who won!!

MTV’s The Challenge Season 26 (!!!!) Battle of the Exes 2 is coming to a close and I have to say I have thoroughly enjoyed this season!  In the final is Sarah and Jordan, Jay and Jenna, and Leroy and Theresa (after Nia was ejected from the game last week for inappropriately touching Jordan).  At the end of last week’s episode, we saw the teams about to jump from their helicopters to start the final race up Mt Slogen, passing through checkpoints with various tasks along the way.  Jordan and Sarah got to choose the order and naturally they chose themselves to jump out of the helicopters first. 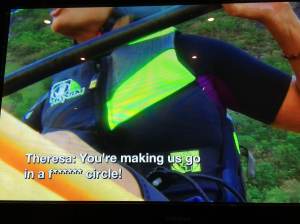 Jordan and Sarah get the clear from the helicopter pilot to jump and in the water they go and start swimming towards their kayaks.  Followed by Jay and Jenna jumping and then Leroy and Theresa.  It is quite the swim to the kayaks and Leroy isn’t doing so hot.  He is not a great swimmer.  Sarah and Jordan are first to the kayaks and take off.  Sarah reminds us that she used to weigh over 200 lbs and Jordan was born without a hand… they have something to prove.  Jay and Jenna get to their kayaks and take off and Leroy and Theresa are way behind and are having a hard time paddling their kayak.  Theresa starts panicking. Sarah and Jordan get to the checkpoint first where they’re told they need to change clothes into running gear.  Jay and Jenna are past the checkpoint as well now and the two first teams are on the path running while Leroy and Theresa are just getting to the first checkpoint.  Hard to tell how much time has actually lapsed between the teams. 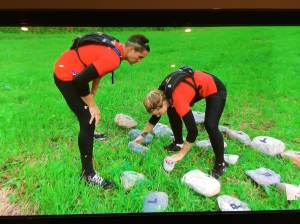 Checkpoint #2: “Mind Games” Unscramble the 5 word sentence to continue with the game.  Jordan and Sarah figure out the puzzle before the other teams are even around “You Will Respect The Trolls” is the answer.   Leroy and Theresa have now PASSED Jay and Jenna on the path.  Jenna’s having a hard time running and keeping up.  Last two teams are now at the puzzle and Theresa was able to figure out their puzzle without TOO much of an issue.  Jay and Jenna are just completely braindead staring at the puzzle. 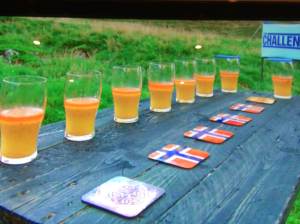 As Jordan and Sarah are running along the path, they’re coming across cows, sheep, and other obstacles they need to get through.  Sarah just keeps saying “Oh this is so beautiful!”  She’s doing a great job at staying positive.  But now they’ve come to the 3rd checkpoint and it’s a drinking challenge.  “Don’t flip your lid”  First they each have to drink this tall glass of this nasty orange junk.  Then they have to try to flip a coaster on to the remaining glasses of orange junk.  They get three tries at each glass.  Jordan misses all three times, he has to drink.  Sarah misses all three times for the next glass, she has to drink it. They’re drinking glass after glass and getting sick.  They had to drink all 8 glasses but they complete it before Leroy and Theresa get there.   Meanwhile, Jay and Jenna have timed out on the 2nd checkpoint and never completed the puzzle.  They’re able to move on to the next checkpoint now. 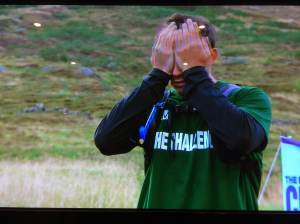 Leroy and Theresa are now at the 3rd checkpoint and having to drink each of the glasses.  Theresa is having a really difficult time.  Meanwhile Jenna is still having trouble running and complaining that she’s tired which is frustrating Jay.  Leroy are finally through the drinking challenge and Jay and Jenna are almost to it.  I hate these kind of challenges where the contestant puke all the time!  It’s not fun to watch!!  Why do they do this to these people?!  Jay and Jenna can’t even get through their first glass.  Jay can’t stop throwing up from the very first glass.  ugh!!  TJ comes up and says if they can’t get it down, they’re out.  Jay starts crying.  He decides they’re not going to continue so they’ve been disqualified.  Jay says they’re leaving as friends, Jenna says she still hates him. Jay’s crying and saying “do you know how much shit every woman and everyone on Twitter is going give us?” …. and they flash their twitter addresses on the screen!  Love it!!  @JayGMTV and @JennaCompono .

Jordan and Sarah make it to Checkpoint #4.  “Pick up 5 rocks and carry them to your next checkpoint.”   They get to the next checkpoint “Get Your Rocks Off: You must stand behind the line and toss 5 rocks into the hole in order to move on.  You must alternate throws.  If you miss, you must run back to the rock pile, collect more rocks and try again until you land 5 total.  Couples must consume a tube of local caviar before beginning each round.”  Oh so gross!!!  Jordan and Sarah miss their first rock tosses and have to run back to the rock pile.  On the way back from the second trip to the rock pile, Leroy and Theresa have now caught up to them.  Sarah and Jordan consume their second doses of caviar and just throw up all over.  They toss the second set of rocks and miss but they hit their 30 minute time limit and are able to move on. 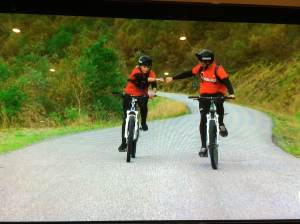 Checkpoint #5: Jordan and Sarah obviously get to it first and there are Bikes waiting there for them.  Leroy and Theresa have hit their 30 minute max and have begun running towards Checkpoint 5.  Jordan and Sarah are just flying on their bikes to try to gain even more of a lead.  But once it starts to go uphill Sarah is struggling and keeps throwing up.   Leroy and Theresa are now on their bikes and Theresa is struggling as well.  Sarah finally gets her composure and gets back on her bike.  They park their bikes and they have to their next checkpoint.  “Rest Stop.  You must take your place together either on top of your bed or on team zone next to the fire.”  The sun is setting and Leroy and Theresa have now made it to the resting spot.  The teams try sleeping but it’s only 10 degrees now and they just have a tiny “bed” to sleep on.

Morning comes and TJ arrives and tells them that Jay and Jenna are out of the game.  TJ tells them they now will scale Mt Slogen which is 5200 feet up.  TJ tells them that Jordan and Sarah will receive a 5 minute lead.  FIVE MINUTES?!  That’s it?!  After kicking butt the whole day before and showing up to the last checkpoint waaay ahead?  That’s just mean.  Sarah breaks down because she’s so exhausted and freezing.  But they take off like champs.  Leroy and Theresa are determined to catch up with them though once they take off five minutes later.  They are scaling this mountain though  and they are so high and there is nothing to catch them if they fall.  I would freaking pass out.  Jordan and Sarah made it first though!! They won!!!!  The challenge underdogs made it!!  $250,000 is theirs!!    Leroy and Theresa weren’t all that far behind though.  They freaking climbed a mountain without any gear.  That’s just nuts.   The four of them did an amazing job!  Sarah and Jordan were a great pair together even though I don’t care all that much for Jordan, I really love Sarah.  I’m so happy Sarah won!!! 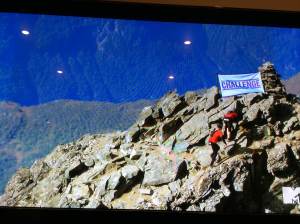