***UPDATE*** What Juan Pablo said in the helicopter to Clare was… she said tell me you love me and he said, “I don’t know you, you don’t know me, I don’t know if I love you, but I sure love fucking you.”  Words every woman wants to hear!  Makes us swoon! (obvious sarcasm)

So, by now we’re all pretty much over Juan Pablo and we’re just watching because we’re curious how it all ends… but thank god it’s ending!  What a disappointing season this turned out to be.  Originally ABC struck gold with Juan Pablo but that soured after his homophobic comments he made in an interview and his true colors shining through plain as day on the fantasy suite episode.

Juan Pablo and the remaining two women, Clare and Nikki, are in the country of Saint Lucia still.  Juan Pabs’ family, including Camila, joins him to meet the ladies.  Clare is first up to have a date with Juan Pablo and meet his family.  Clare is awe struck by Juan Pablo as a dad.  She says it makes him sexier.  I’m not sure who drives me more nuts… Clare and how she holds her mouth open after everything she says or Juan Pablo acting like he’s so smooth just because he has a daughter.  Juan Pablo’s mom tells Clare that he is very hyperactive, lots of energy.  That’s pretty obvious.  His mom even says that his “honesty” comes across as rude and it makes her cry at times too.  RED FLAG!!!  Don’t go for a guy who makes him mom cry with hurtful words!  Hello!  Then his cousin tells Clare that Juan Pablo has a tendency to run when the going gets tough.  Another red flag!  His dad tells Clare that she’s really something and he’ll remember her no matter how it turns out.  If he does pick Clare then his dad welcomes her into the family with open arms.

Now it’s Nikki’s turn to meet the family that he didn’t meet a few weeks ago in Miami at Camila’s dance recital.  Nikki explains to them all the places they’ve traveled.  Nikki talks to Juan Pablo’s father and he warns Nikki that “he thinks he knows the truth in everything.”  In other words, the man always thinks he’s right.  ANOTHER red flag.  His cousin says the same way to Nikki as he did to Clare about how when the going gets tough, Juan Pablo just takes off.  His family isn’t exactly trashing him, but they’re trying to give these girls a realistic picture of what he is truly like.  These women don’t seem to be picking up what they’re throwing down.  They’re off in Juan Pablo la la land.

For the evening part of the date, he comes to her place for their date and Clare takes this opportunity to confront him.  As she talks, Juan Pablo starts dismissing her like Andi was complaining that he does.  “Okay okay okay, sure, yup.”  Clare says she has a lot more to offer a relationship than just the physical part.  Juan Pablo works his charm though and eventually, with some teeth pulling, tells her what she wants to hear and she starts melting.  Ugh!!  I ALMOST had respect for Clare for a minute.   She said now she knows he wants her here.

Now it’s his date with Nikki.  They board a boat and Nikki says in her interview that she wants to hear all the things that Juan Pablo feels about her.  She’s really been wanting to hear it.  He asks her if she has any concerns and she tells him that she feels he is guarded and is sometimes afraid that he will get hurt.  He says “no, I’m not guarded.  Not guarded at all.  If I feel it, I say it.”  But then doesn’t tell her anything about complimentary or how he’s feeling about anything.  Awkward silence and a look of deflation from Nikki.

At dinner, Nikki says to the camera again that she wants to hear it from him tonight how he’s feeling… that it’s her and how in love with her he is.  She keeps trying to get him to say something and he doesn’t say much of anything.  She gives him a picture and a card that pours her heart out in it and he doesn’t say anything other than “thank you” and kisses her.   Then he tells her he’ll see her tomorrow and get some sleep.   Nothing.  He says NOTHING.  For the first time I honestly feel bad for Nikki.  This whole episode is so hard to watch!!  He leaves and she just falls apart and starts crying.

The next morning, both women say if Juan Pablo proposes to them they will say yes.  The entire mood of both of them seems more optimistic.  I can already tell something big is going to go down because there is still twenty minutes left in this episode and usually they do this in like the last 10 minutes or less of the show.  Something big is going to happen, I just know it.

Clare is the first out of the boat going to Juan Pablo which usually means she will be going home without a proposal, rose, and without him.  After Clare makes the long walk towards Juan Pablo, she tells him she’s nervous.  He of course says “it’s okay.”  And then she launches into her speech about how she’s like him from the beginning, they had ups and downs, but she believes in him.  He then tells her that she’s amazing and he appreciates her being there, but he has to do what he thinks is best for him and say goodbye to her.  He then takes a step closer to her and she stops him.  The live audiences roars in applause.  She lets him have it.  He says “Do you want me to tell me when I made my decision?”  She said, “It doesn’t matter” and begins to walk away, she stops, turns back and says, “I’ve lost respect for you.  You having put me through what you just put me through…. I wouldn’t want my children to have a father like that.”  He says “mmhmm okay.”  UGH!!!  Enough with the “okays!!!”   He does not seem the least bit fazed by this at all.  And a small amount of respect is restored for Clare.  Camera pans back to Juan Pablo and he says “Whew!  Glad I didn’t pick her!”  that should never be something you say about your #2 pick on the day of the finale!!

Now it’s Nikki’s turn to arrive by boat to Juan Pablo and take her long walk towards him.  She says she can’t wait for Juan Pablo to tell her that he loves her.  She launches into what she loves about him and that she wants to be a part of his life and Camila’s life.  She ends it with “I love you.”  Juan Pablo then gives his speech to Nikki and says that he has the ring in his pocket but he’s not going to propose because he’s not 100% sure he wants to marry her.  Words every woman can’t wait to hear!  “I’m 100% sure I don’t want to let you go.  I like you a lot… A LOT.  So Nikki, will you accept my final rose.”  And Nikki says “Absolutely.”  Seriously, girl? 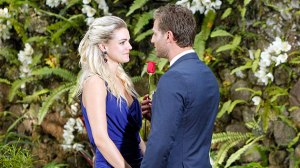 Well that was the worst ending EVER in Bachelor history!!!